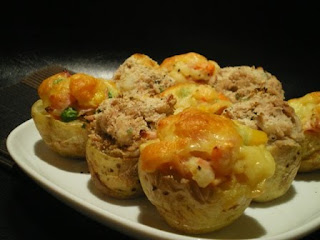 This finger food was prepared on Sunday afternoon as our snack while we were enjoying the movie at home. I like to eat something while watching movie… instead of having chips, baked potato would be healthier. = )
They were 2 types of baked potato here… 1st - Tuna baked potato and the 2nd is Cheese and ham baked potato. They were easy to prepare but time consuming... as you need to bake the potatoes for about an hour to make it soft and after that you need to scoop out the potato one by one. Although it takes longer time to prepare but I really enjoyed doing it! They were yummy, especially the Cheese and ham ones… (>_<) 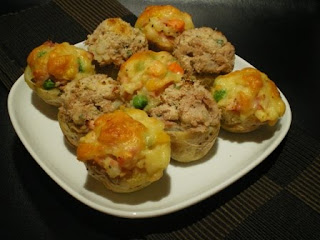 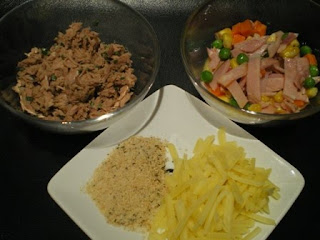 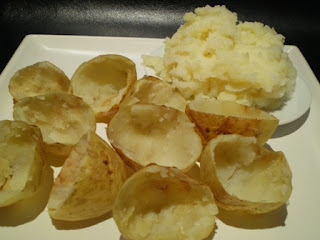 Potato mixture for Bowl A 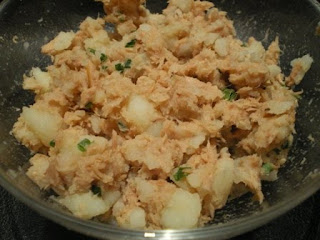 Potato mixture for Bowl B 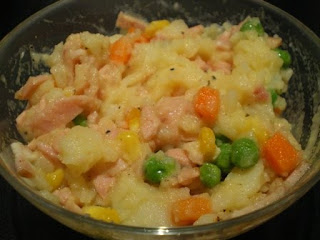 What to do
(1) Turn oven to 210 degree.
(2) Scrub potatoes under cold water. Pat dry with paper towels and then pierce potatoes all over with a fork – this helps potato to cook evently and to prevent the skin splitting.
(3) Place potatoes directly on the oven rack and bake for 1 hour.
(4) Cut potatoes in half, scoop out flesh with a teaspoon, leaving a think shell.
(5) Mash scooped out potato in a 2 separate bowl; bowl A and bowl B and mix well.
(6) Spoon filling into shells. Sprinkle breadcrumbs on top of potato mixture bowl A and cheese cheddar on top of potato mixture bowl B.
(7) Bake for 15 minutes and serve hot! 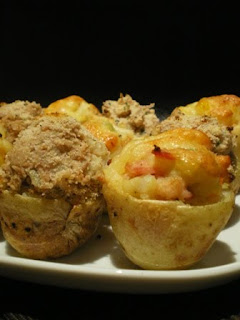 Yummy! I love the Cheese and ham ones the most... 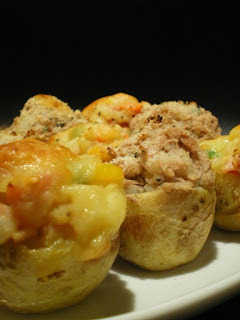 Someone who loves to cook, bake and eat! Here, I am sharing my kitchen adventures and recipes with you. Happy cooking n' baking!